Writing about women in tech that quotes men

The Sandman Will Keep You Awake - The Loop 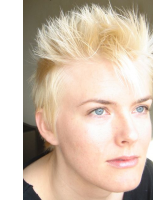