So you made a mistake

So, you made a mistake. You gave a porny presentation at a technology conference, or you made a sexist blog post, or you organized a conference with 0.00% female speakers. And, you got called out on it. What can you do? 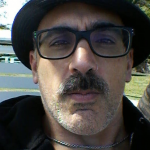