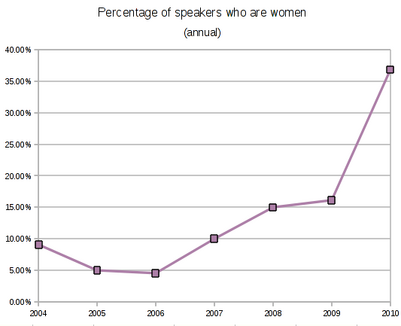 Ohio LinuxFest (OLF) takes place each autumn in Columbus, OH. Originally, it was an "InterLUG" gathering of members of all of Ohio's LUGs. It has since grown in size to accommodate 3 days of activities and over 1000 participants.

In 2009, OLF hosted its first Diversity in Open Source Workshop, after Elizabeth Garbee pointed out to Moose Finklestein that the Women in Open Source workshops at other conferences didn't go far enough.

Women who have spoken or are scheduled to speak at Ohio LinuxFest include:

Bethlynn Eicher is not credited in the 2004 speakers list; however, she gave a well-attended presentation on LUGs during the BOF track.

After the 2009 spate of sexualized presentations, the senior organizers sent an email containing the following to all 2009 Ohio LinuxFest speakers:

I hate to have to bring this up, but in the past couple of years there’s been a surge of talks at various conferences – including OLF – that are have contained inappropriate content. Please remember that Ohio LinuxFest aims to be a family-friendly and professional event. Anyone who cannot meet this basic standard will be escorted from the stage immediately and then bbqed and served at the DIOS workshop the next day.

They still had to explain to one presenter why he would not be allowed on stage until his slides were modified. This information is now contained as part of a static speaker information page that all speakers are referred to. As of 2011 it is part of the talk submission process (as a contract). A similar statement is part of the sponsor contract as well.

Additionally, the Ohio LinuxFest has a Conduct Policy, of which a small sample version appears in the conference program. Discrimination and harassment are not tolerated for any reason, human or computer related.

Community content is available under CC-BY-SA unless otherwise noted.